Paris was number one on my list of places I HAD to visit while in Europe. We arrived Thursday morning and checked into our hostel. As usual, we stayed at another St. Christopher’s Inn right on the canal, then we immediately took public transit to the Eiffel Tower. We were super impressed by the Paris underground, it was super similar to London’s and very easy to navigate. Use the Google maps app for specific instructions on stops, and buy the booklets of ten or twenty train tickets to save some money. We were given specific instructions to take either the M6 or the M9 to the Tracadero stop and get off there for the BEST first impression of the Eiffel Tower. 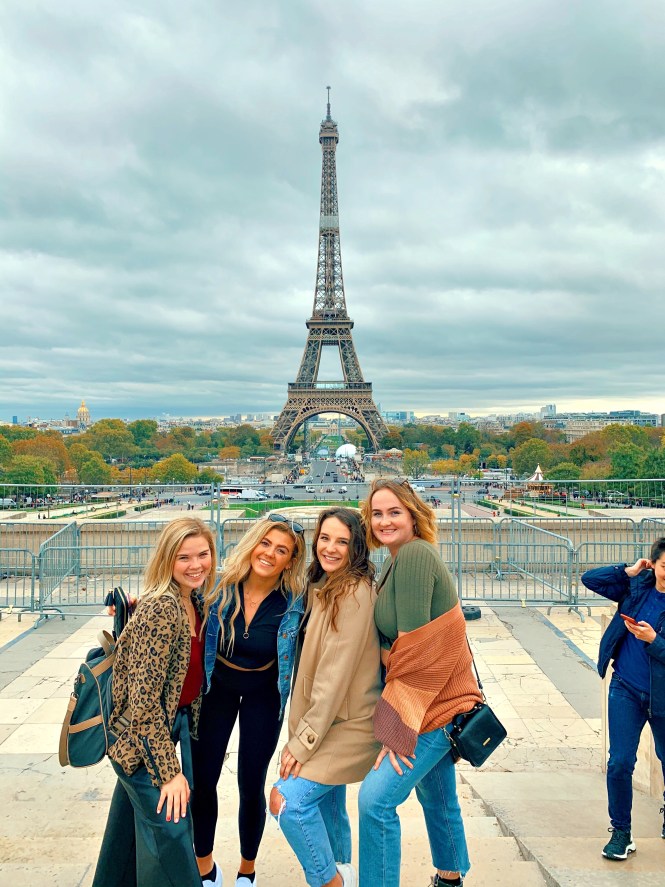 This sounds extremely cheesy, but every week I have these moments of feeling so much joy like I will never be this young, free, and happy again, and I almost get scared like there’s no way life can get this good again… and then somehow each week here, it does. We exited the train, rounded the corner, and there was the Eiffel Tower in all its glory. My jaw honestly hit the floor. I have literally dreamed of seeing it for so long and couldn’t believe I was actually in Paris, with some of the best girls, staring at the Eiffel Tower. It was everything I thought it would be and probably one of, if not my actual favorite moment of this trip, competing only with seeing the Northern Lights. 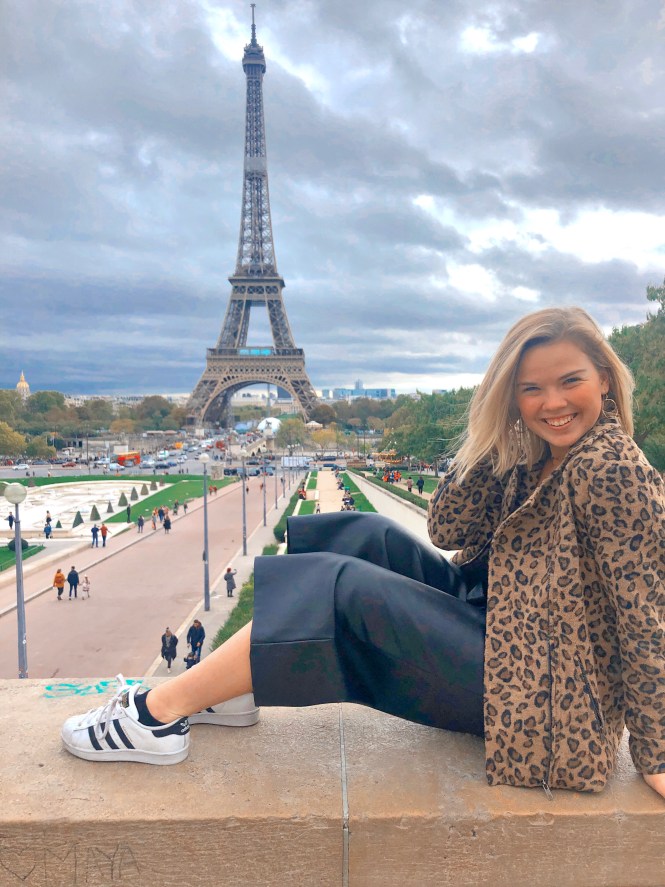 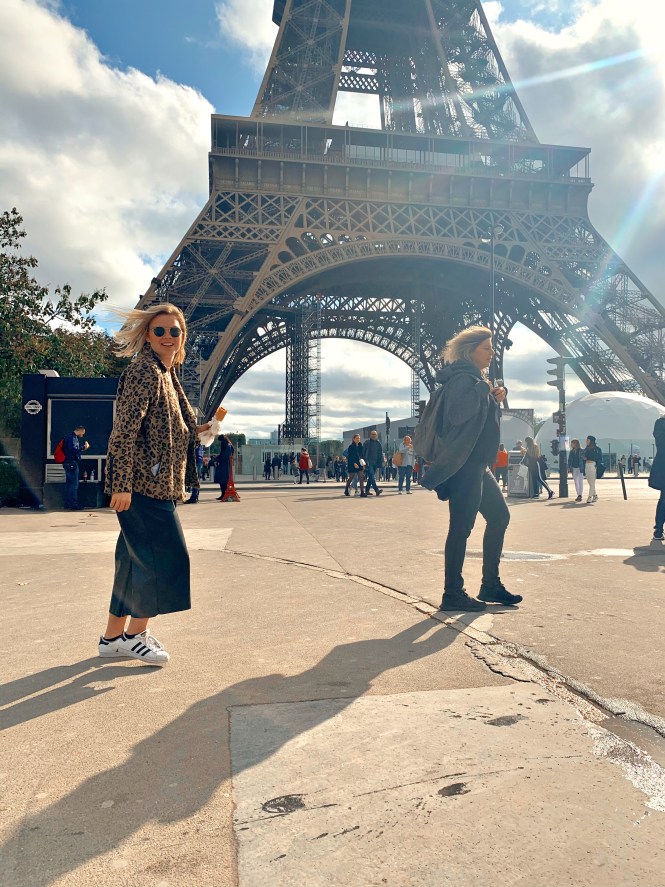 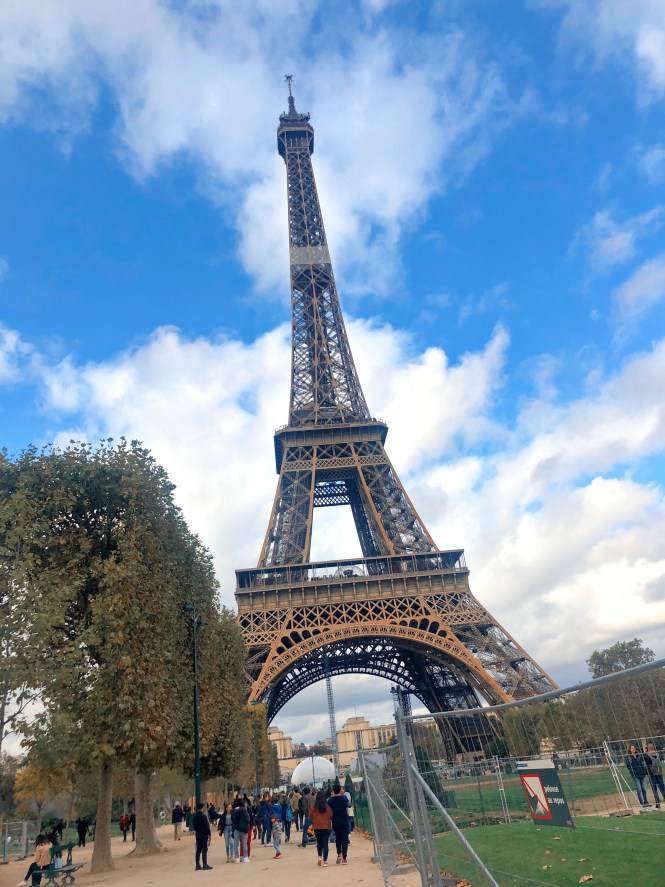 As we were walking closer we were literally bombarded with tons of merchants. The first one we met, was calling us sexy fruits (I was a kiwi) and we thought it was so funny. He gave us some free Eiffel Towers, we offered to pay him and he told us they were worth six euros. We didn’t have much cash so we gave him the little we had, maybe six euros total. Then we kept walking… and ALL the merchants kept calling us fruits, Beyonce, Shakira, and Lady Gaga. We quickly realized we weren’t special, the trinkets (that we didn’t even really want) were being sold five for one euro, and it got kind of annoying. So anyone reading this, just walk on by or prepare to get ripped off. Rookie mistake.

Back to the Eiffel Tower though, wow! In true millennial, Instagram, basic girl fashion… we took a ton of pictures. We were going to go up it, but the lines were so long we decided to skip it. Plus, we figured if we did a rooftop thing on another building, we would have views of the Eiffel Tower, which is the highlight anyways. It’s definitely on my list for next time though. 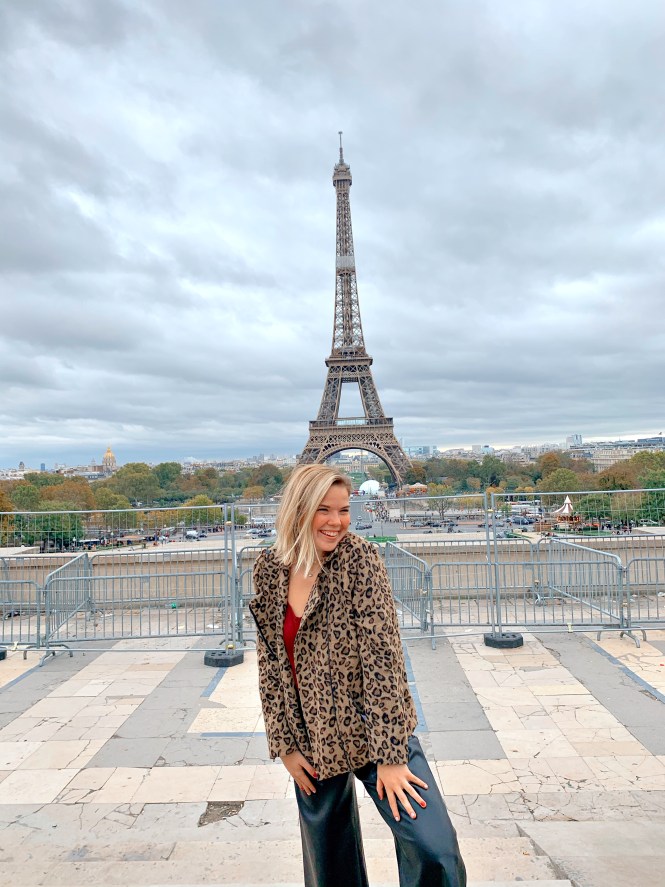 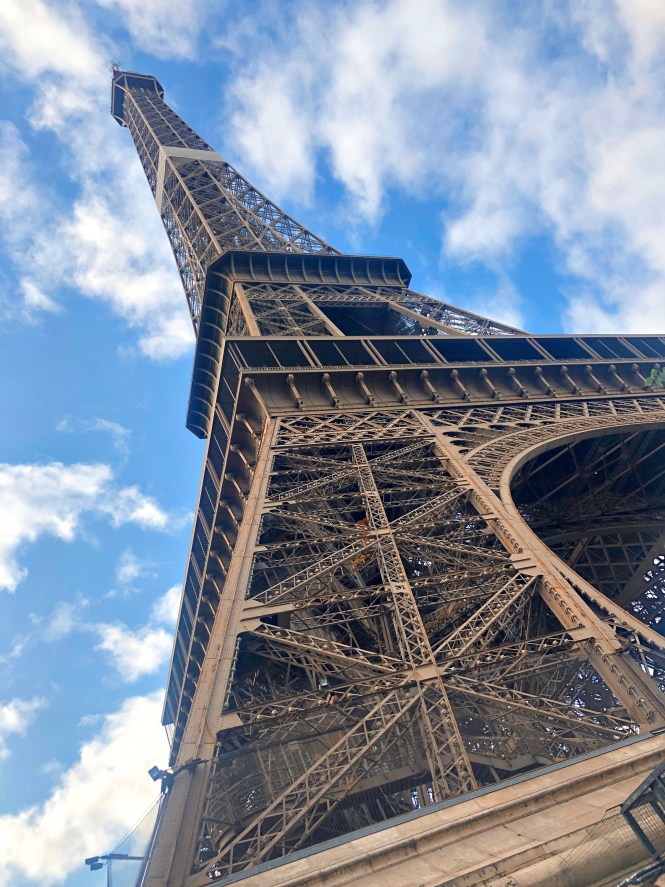 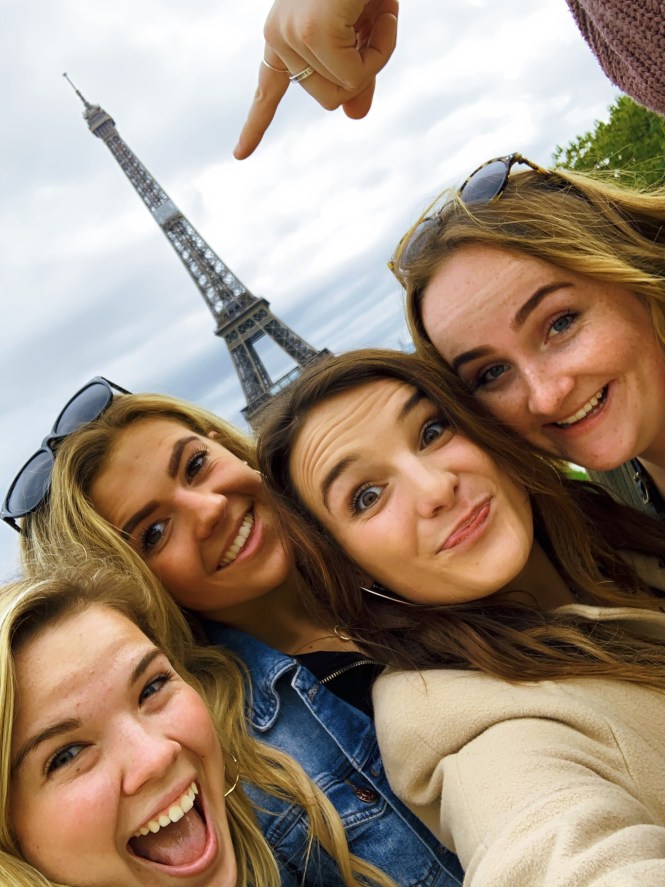 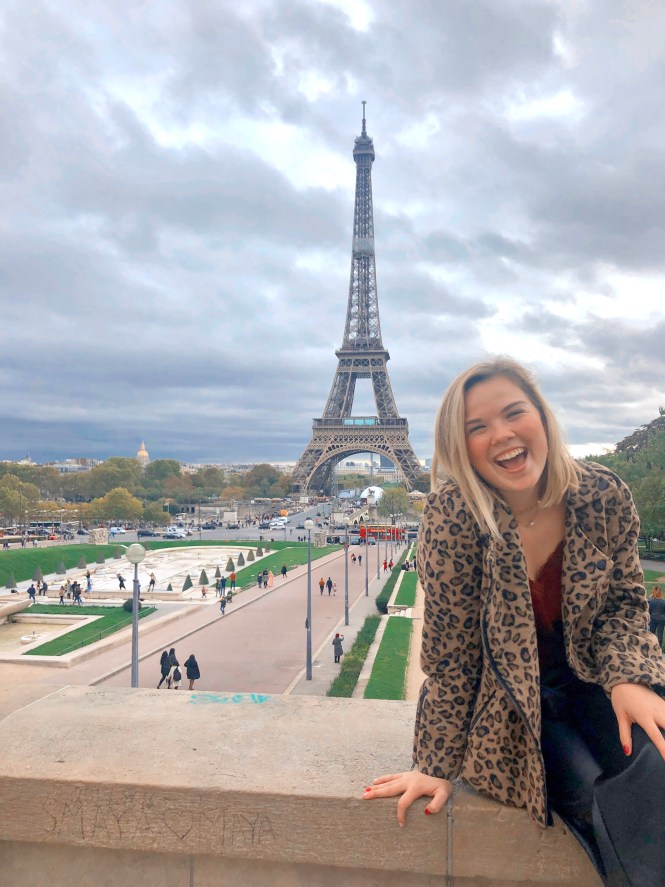 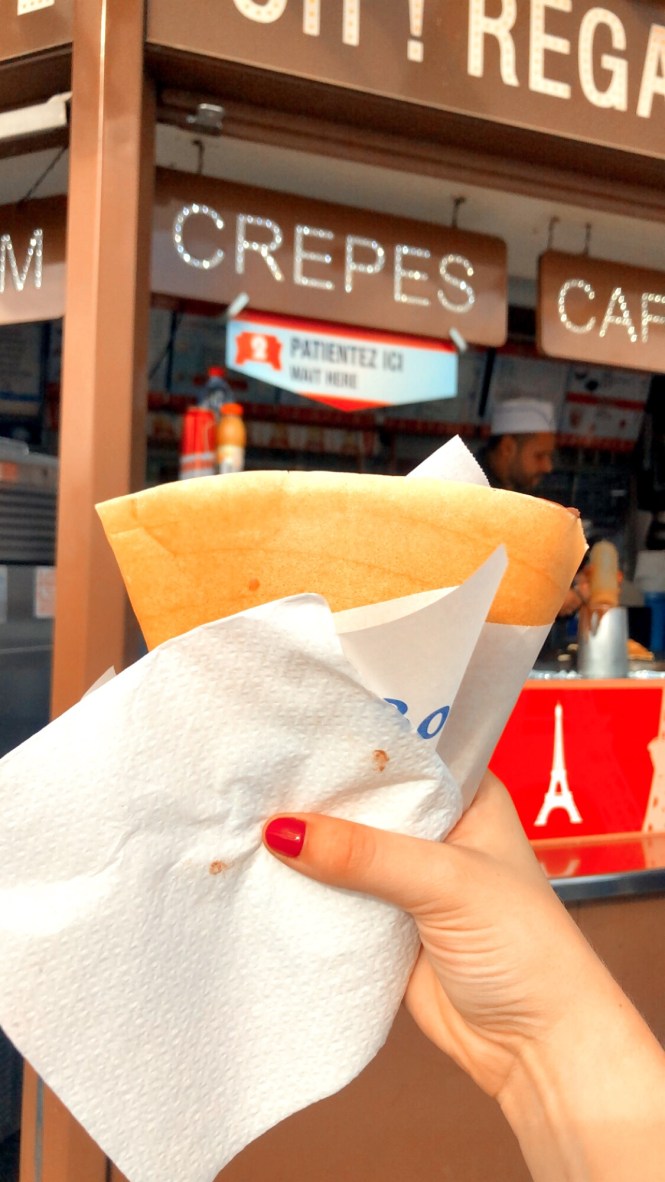 After the Eiffel Tower, we headed to the catacombs. Over six million people were buried underground here to save space in cemeteries. The history here was amazing, and we kept trying to figure out how they got so many bodies down there, or even how they built the channel itself? Especially so many years ago without the technology we have now. The line here was extremely long too, so if visiting I would suggest trying to buy tickets online or getting there earlier in the day. Maggie had been to the catacombs in Rome and she said the Paris ones were better so we absolutely recommend visiting. 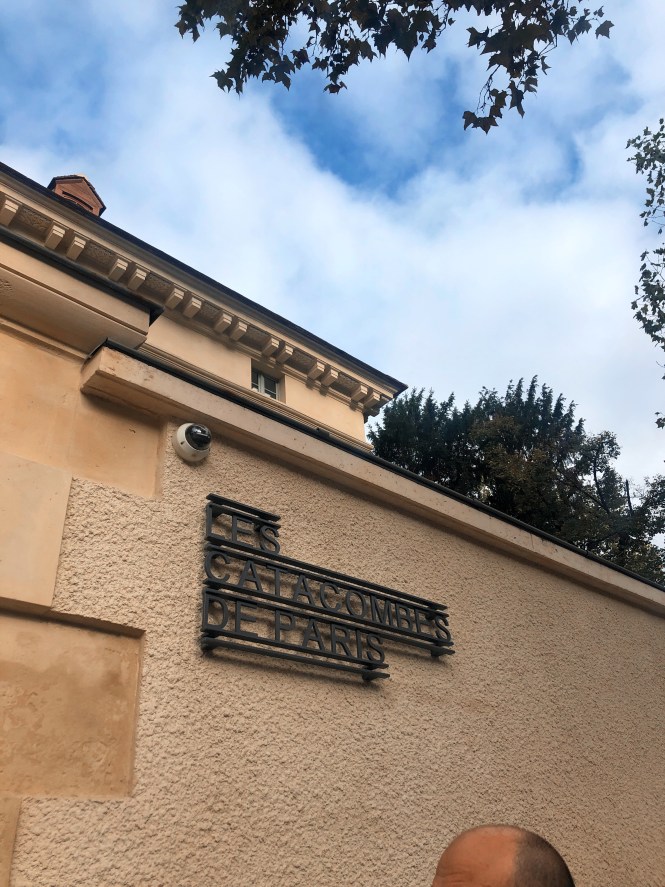 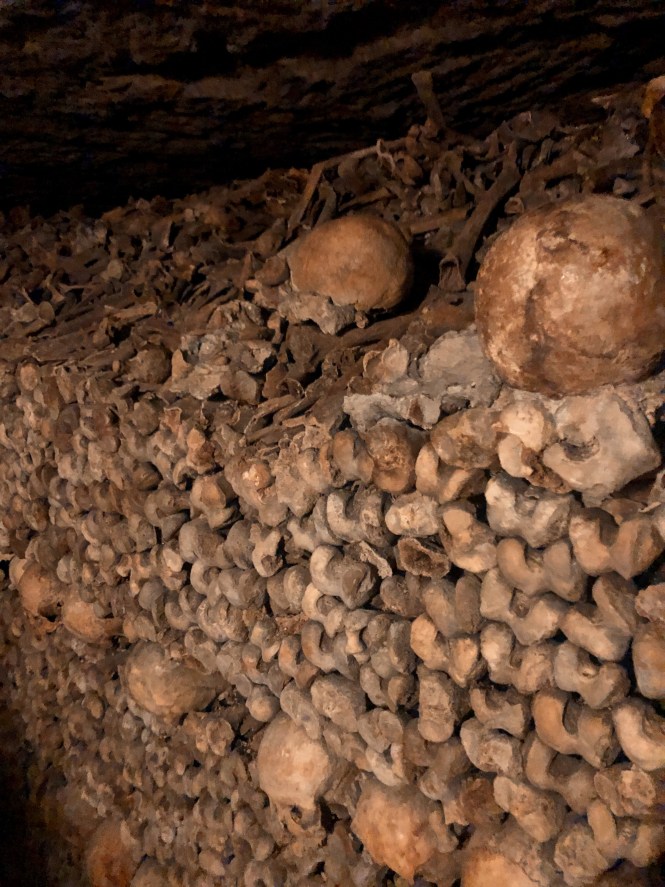 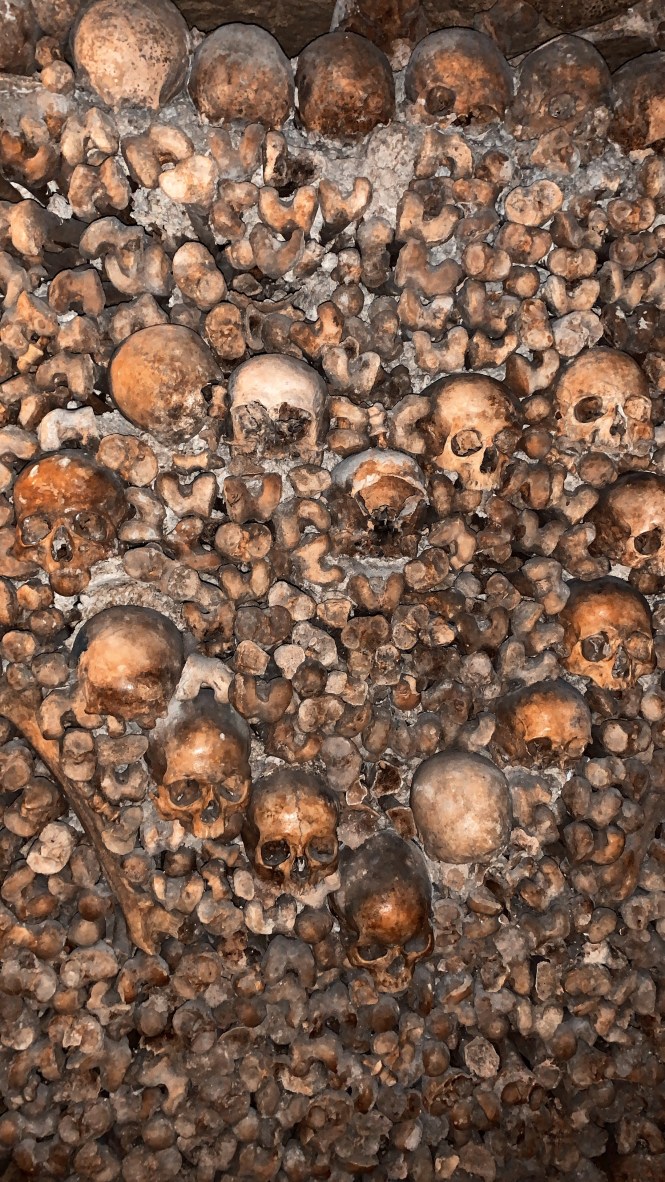 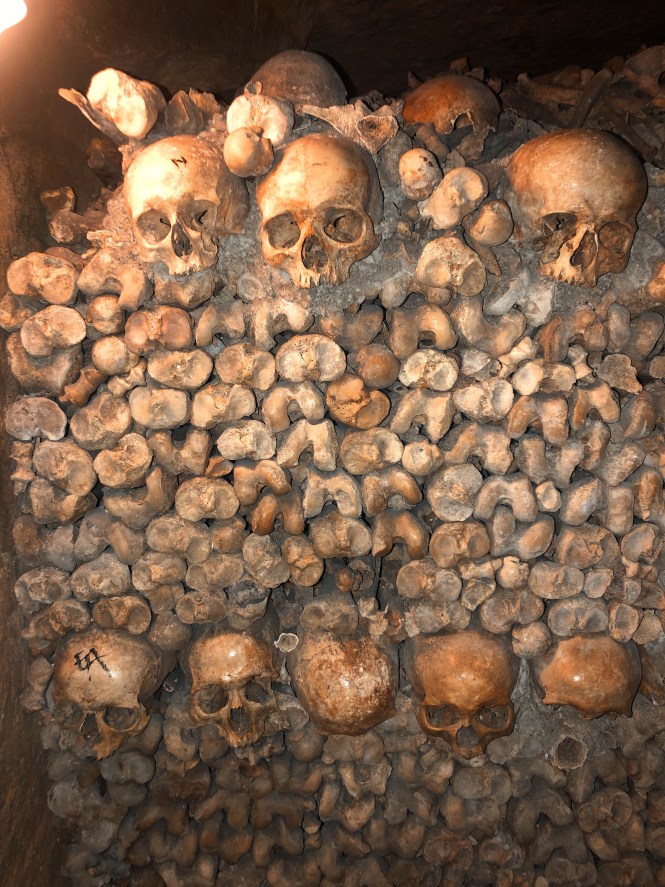 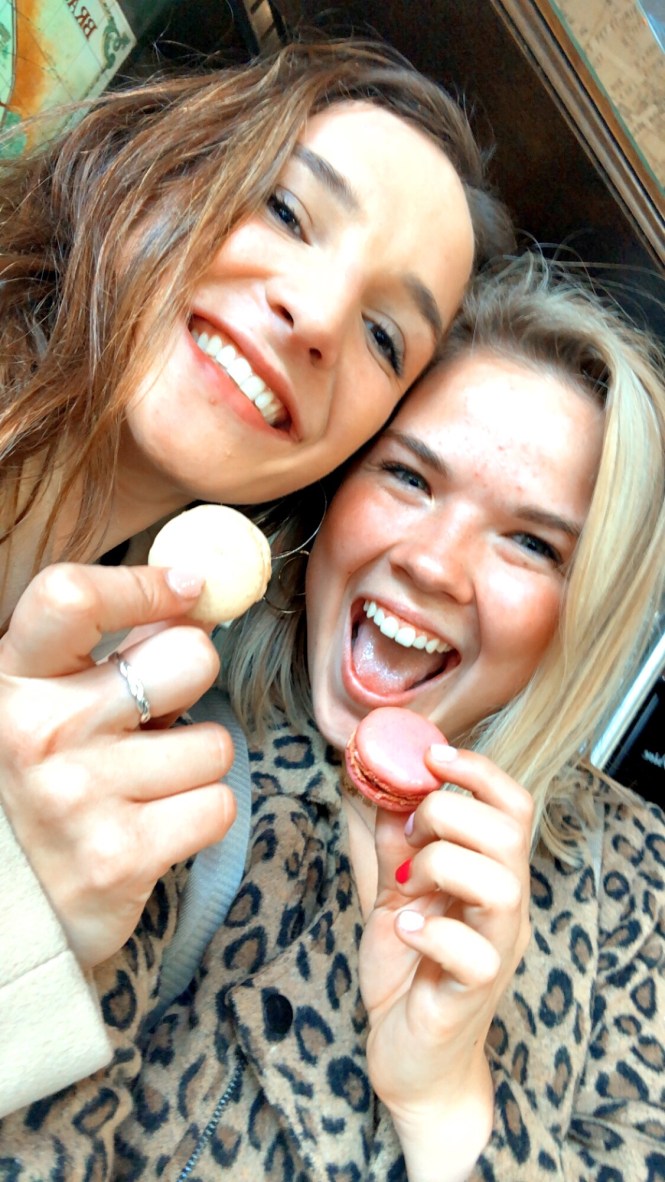 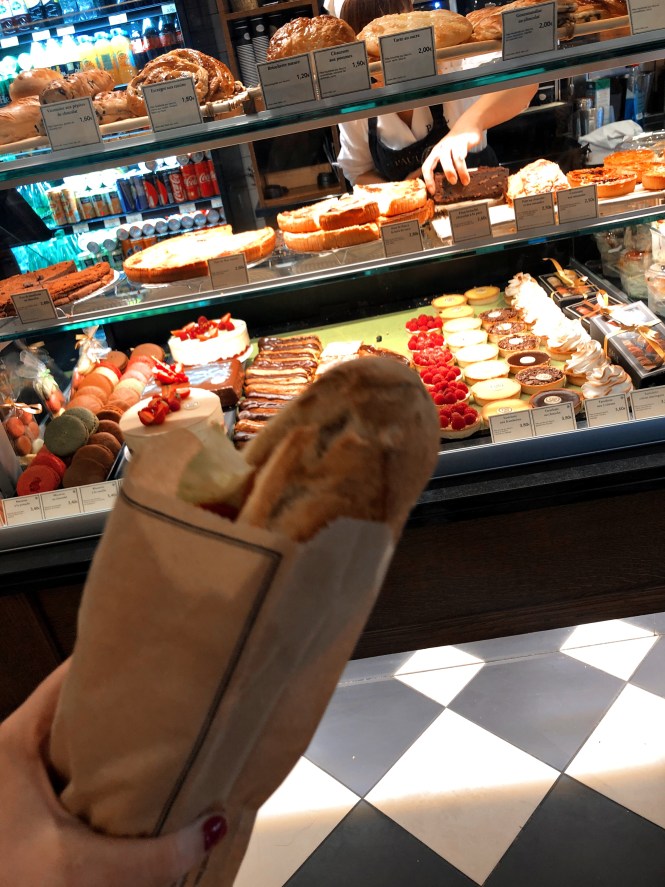 That night we went to a little Parisian restaurant and tried escargot. One of my favorite things to do is try new food, and these snails did not disappoint. We all thought they were delicious. 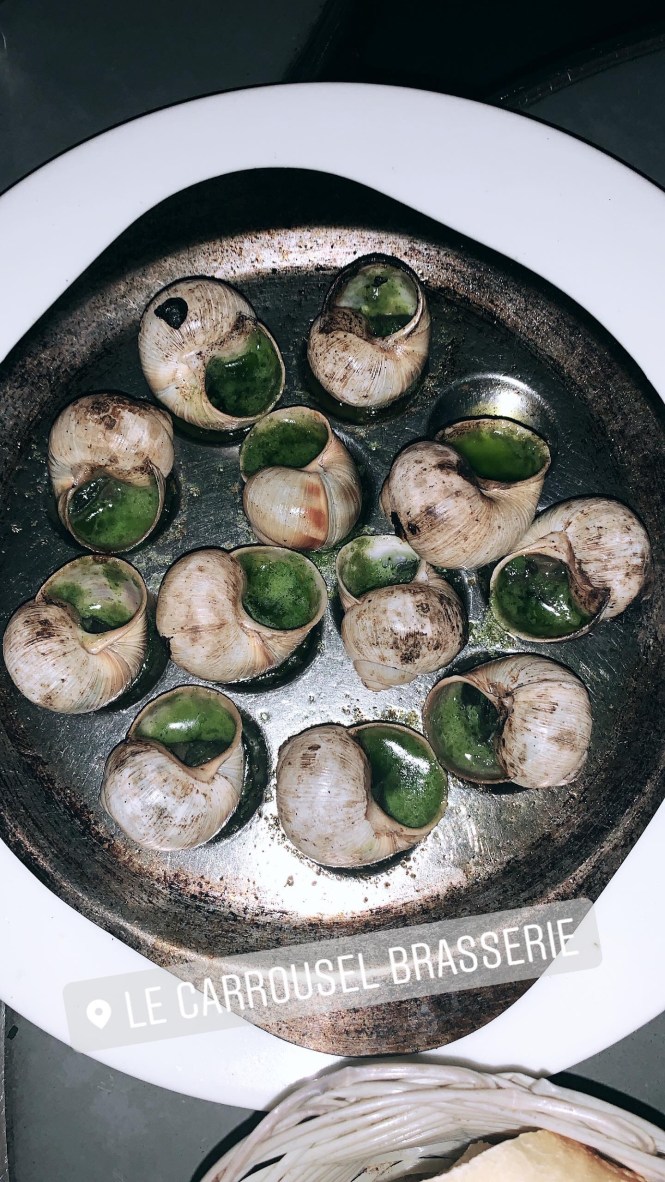 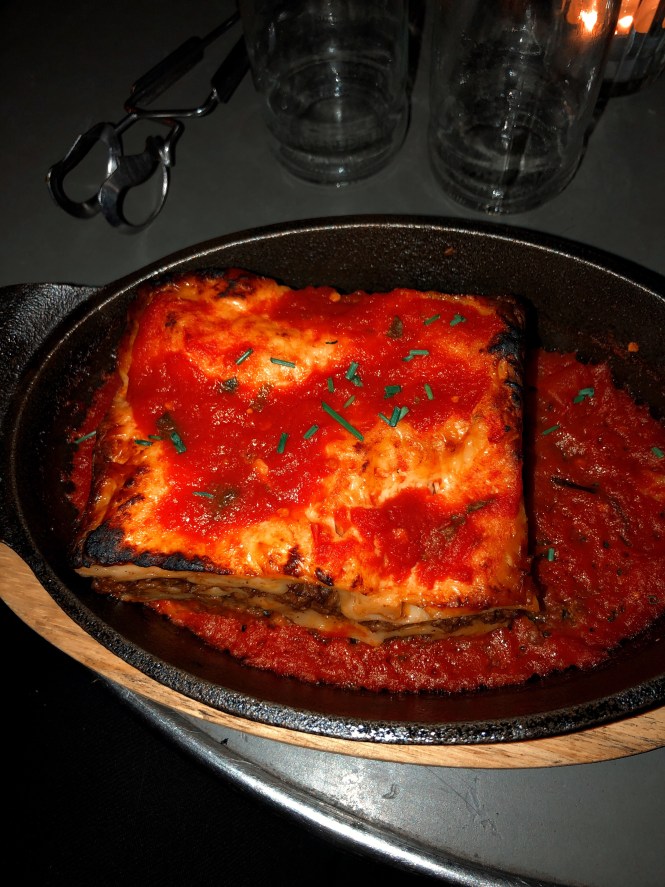 After dinner we walked over to see the Moulin Rouge. I would’ve loved to see a show but the cheapest tickets were 97 euros so we skipped it. The street that it was on was definitely an experience to walk on at night though. I’ve never been to Vegas, but I would describe it as a rated R version of the strip. I’ll leave it to your imagination what we saw. 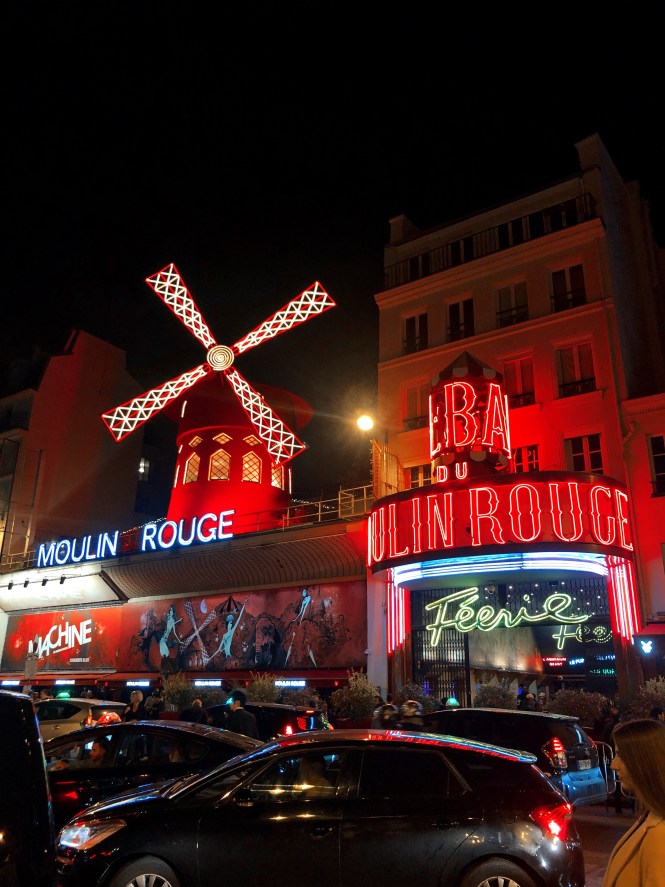 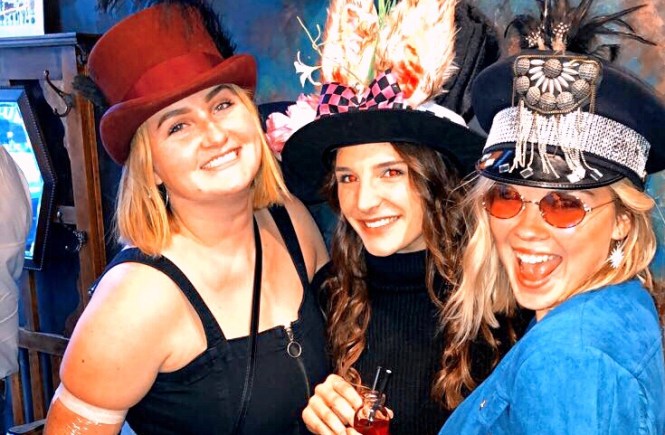 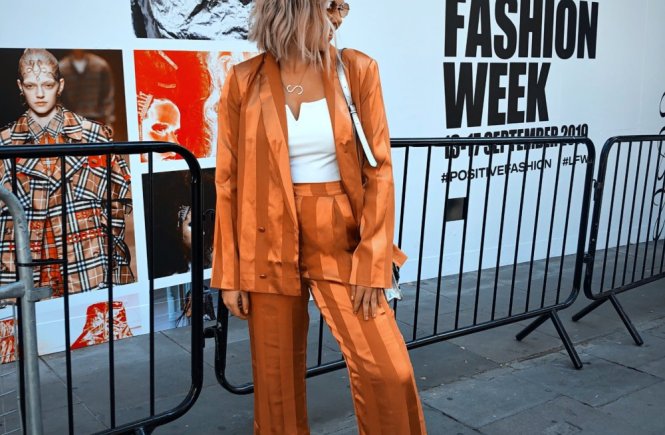